A Separation and Undefeated... 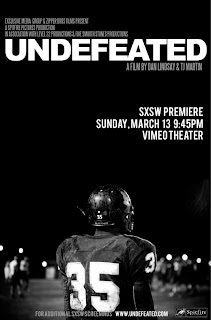 Spring is here in Chicago, the clocks are an hour ahead and the last two days have seen awesome weather. Amazing what a couple of days like this can do to the city as everyone is out and about, people are seeing the end to winter and the upcoming days of sun and shorts.

I was all over this weekend and in my walking around and being outside, I checked out two movies that won awards at the Oscars a few weeks ago. I saw A Separation and Undefeated, two very good films that people should see when they get a chance.

First off, I saw A Separation late Saturday morning at The Music Box theatre. Always interesting seeing movies there as the theatre is very small and the screen is a lot smaller than what you are normally used to in theatre viewing. But for this movie, it worked out totally fine as there was a tiny crowd and the film did not suffer any from being seen on a smaller level. I really liked this film and the story that takes place in present day Iran. Focusing on a couple of different topics within the Iranian culture, the film was a really good look into how religion, marriage and faith affect two different families. The dialogue was very real and it was one of those movies that made you feel as if you were not really watching a movie. You could see how the actors reacted to each situation and you could really see how what was happening was affecting them on a very emotional level. Subtitles again with this film, but there is a reason it won the Best Foreign Film at the Oscars and so check this one out, you will not be disappointed.

The second film I saw this weekend was Undefeated. This movie won the Oscar for Best Documentary and follows the Manassas High School football team of North Memphis and their quest to win their first ever playoff game in the history of the school. North Memphis is an extremely impoverished area and a lot of the players on the team do not have father figures in their lives and so football and their coach is one of the only things they have going for them. As with all documentaries, the directors decided to focus on a few story lines and so we learn a lot about the coach and three of his players as they play their season. I will not give anything away as documentaries are all about what is going to happen at the end, but I will say that there were two scenes in this film that were two of the more emotional scenes I have ever seen on film. The gravity of what happens and what is said tears at your heart and I think everyone else will feel the same way. See this movie and learn a whole lot about character and how you build it amongst a group of young men. It was a great movie.
Posted by Drew Brennan at 3:04 PM No comments: