The Girl with the Dragon Tattoo review 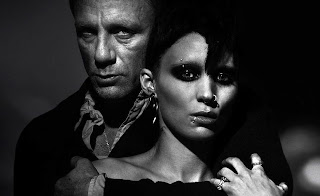 Wow!! Been a while since I have updated the blog and so thought, what better way than with a review of The Girl with the Dragon Tattoo. Now for those of you who have not read the books and are going to see the movie, maybe lay off this review as I don’t want to spoil anything for you. Okay, now we are ready to go….

So I have read all three books in the Stieg Larsson trilogy and loved them. While the first one took a little bit of time to get into, it did not disappoint as it introduced us to one of the most interesting characters to come along in a long while….Lisbeth Salander. The second book was addicting as Stieg brought us further into Lisbeth’s life and giving us a whole lot of back story. The third book wrapped everything up for the most part, although there are stories out there that Mr. Larsson had written more books for the series, but due to his unfortunate passing, we might never get to see what actually took place.

And of course when a trilogy is complete and when it is hugely popular, movies are made and the three books were made into films a few years ago with an entirely Swedish cast (as that is where the books take place). Fast forward to now and David Fincher (Seven, The Social Network, Fight Club) is at controls of the “Hollywood” versions of the stories. Now I did go see all three Swedish films and liked them all very much, they were very well done. Subtitles for sure for those of you out there who stay away from those types of movies, but highly entertaining and they did an amazing job of bringing Lisbeth to life on the big screen. For those of us who read the books, we all had a pretty good vision of how we thought Lisbeth would look and act and to finally see her on screen was pretty dramatic. Noomi Rapace was the actress who played Lisbeth and she did an awesome job in what had to be one of the hardest parts to pull off in recent movie history.

But I am here to talk about the new version of the movie and I saw it late last night on opening night. I am a big fan of David Fincher and so was intrigued as to how he would pull the story together and how he would give us his glimpse of the world Stieg Larsson created. And I will admit, after having slept on it for the night, while I enjoyed the movie a whole bunch, I think I am going to have to go with the Swedish version as being a little bit better. Now to be fair, I think pretty much everyone who has seen both movies is going to eventually compare the two ladies playing Lisbeth, as she is pretty much the focal point. That being the case, I am going to say that I think that whole aspect of the movies is a wash. While I loved Rapace’s portrayal of Lisbeth, I was equally pleased with how well Rooney Mara did in this huge role. Most people don’t know who Mara is, she has a very short filmography, and many were shocked when she won the role. Most moviegoers know her as the girl who dumped Mark Zuckerberg at the beginning of The Social Network and that is about all anyone has seen her in. And I think there were a lot of skeptics out there who were not sure she could deliver in what was one of the most sought after roles of the last decade. I am on the bandwagon though! She did an amazing job and she was great in what is an extremely demanding role. For those who know the story and know about Lisbeth, playing her would not be an easy task as there is a whole lot that happens in the story that would command just some amazing acting. Rooney Mara pulls it off and I think it is one of the better performances I have seen in a long time. You really can sense what is going on within her through her eyes and her expressions…and that is not an easy thing to do. She looks the part as she had all the earrings and tattoos and I found myself always gravitating toward her when she was on screen, even when she was in the presence of the more accomplished actors that are also in the movie. Lisbeth is a loner and you certainly got that feeling in the way she was portrayed by Mara and it cannot be understated how tough it must have been to film some of the scenes. She does an awesome job though and I am definitely a fan of Mara and look forward to how she moves the Lisbeth character forward.

Taking it all back to the story and my overall feel for everything, I did like the movie, but the ending seemed just a bit rushed. Good performances by Christopher Plummer, Robin Wright, Stellan Skarsgard and Daniel Craig, but none of them really stood out. I am a big Daniel Craig fan and actually think he does a whole lot better job playing Bond than he does Blomkvist. And for those who are fans of the AMC show “The Killing,” you will be happy to know that Holmgren is in this movie as a part of Millennium and so surely he will be around for the other two films.

I did like this movie, don’t get me wrong. There is a very climactic scene that takes place toward the end of the book and when it happened in the movie, there was about twenty minutes left. From there they seemed to close up and finish the rest of the movie extremely fast. There was a lot that took place in the last twenty minutes (from the book standpoint) and it seemed that they could have developed that aspect of the story just a little better. If I had not read the book, I know I might have been just a little confused. Either way, go see this movie. It is highly entertaining, it has a great soundtrack (Trent Reznor again) and if anything, become a fan of Rooney Mara, she does not disappoint.

Thanks for reading, sure I will be back again soon…
Posted by Drew Brennan at 8:57 AM