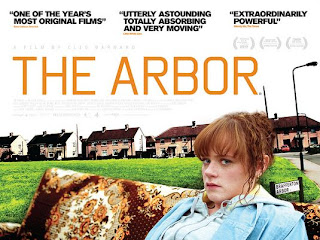 I recently caught a movie recommended to me by the crew over at Filmspotting and the one that won their Golden Brick this year....The Arbor. Definitely something different from anything I have seen and it was a very interesting way to film a documentary. For sure check it out if you get the chance as there are actors in the documentary who are mouthing the words from interviews of the real people the story is based on. The movie is about Andrea Dunbar who rose to fame when she wrote a play when she was a teenager growing up in England. She became pretty famous, but also had some serious issues and the story revolves around the three children she had and what happened to them after she passed. One of the cooler movies you will see and so make sure you watch it on Netflix streaming if you have it....
Other movies that I have recently seen include If a Tree Falls which is the story of the Earth Liberation Front and some of the crimes they committed over a stretch of years in the Pacific Northwest. It follows one member in particular and his arrest and subsequent trial in which he was labeled a terrorist and facing over 300 years in prison for his acts of arson. While I don't agree with what he did, labelling him a terrorist is a little harsh as no one was ever harmed in the fires and they took special care to make sure they never hurt any person...they were only trying to destroy property. Once again, I don't agree with what they were doing, but a terrorist he was not. Definitely check this film out as it was up for Best Documentary in this year's Oscars, but it lost to Undefeated, another movie I need to see.
And speaking of the Oscars, I made it a goal of mine to see all the Shorts that were nominated this year. The Landmark Century Cinema shows all the Shorts (Animated and Live Action) in the weeks leading up to the Oscars and because they are shorts, you can see them all at once. I went on consecutive Sundays and checked out all the selections and was certainly impressed with the Live Action Shorts. The Animated ones left a little bit to be desired, but all in all, a very good experience. Props to The Shore which won the Oscar and the film was set in and filmed in Northern Ireland where my cousin Mark and his wife Leona and their family live. Always loving and rooting for Northern Ireland. And if you get the chance, check out Tuba Atlantic, you will not be disappointed if you like machine guns and and an old man who has a dream to play a tuba that can be heard from Norway to New Jersey. You will have to see it to believe it ;).
Lastly, I checked out Act of Valor, the movie that stars real life NAVY Seals. Very impressive to say the least the lives these men lead and it was cool to see some real life people acting out scenes that have for sure taken place around the world. I have the utmost respect for NAVY Seals and the the way in which these men do their job and the humility they show is truly a lesson to learn. We are lucky to have people like this helping us and watching over us all the time. The action sequences are really pretty unreal and go see this movie to learn a little more about how awesome some people really, truly are.
Posted by Drew Brennan at 3:52 PM