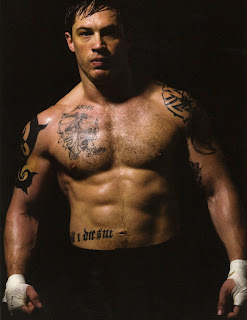 All right so it was a pretty regular night for me on Tuesday, but I was super excited as I was finally going to get the chance to see the movie Warrior. I have been wanting to see this movie for a long time, but just never got around to getting it to the top of my Netflix cue. Finally it arrived this week and I figured I would watch a little bit of the movie before I went to bed and try and finish it later in the week. I started the film around 10 PM thinking I would watch a quick half hour before I went to bed. Next thing I know it is 12:15 AM and I am just finishing one of the better movies I have seen in the past year.
I feel like that as much as this movie got some really good reviews last year, for whatever reason, not a lot of people saw this film. I think a lot of people see the MMA fighting that is in the movie and think that that is all they are going to get. And if that is the case, and you have not seen this one, stop what you are doing, get it on your list and see this movie. Not only is this an awesome story, but the acting and the actors do an amazing job. Nick Nolte was nominated for an Academy Award and from a sports perspective, this has to be one of the better sports films in the last ten to fifteen years.
I won't get too much into the story, but basically two brothers each have their own reasons for entering a winner take all MMA competition. The brothers, played by Joel Edgerton and Tom Hardy are estranged and along with their own relationship, they are both dealing with their father (played by Nolte) and how to accept back into their lives their dad who was an alcoholic, abusive man to both them and their mother while they were growing up. Edgerton, who in real life is Australian, does a terrific job playing the older brother and he is definitely someone to keep your eye on as I have a feeling he is going to be in a lot more films coming up here real soon. A lot of people know him from Animal Kingdom which was a highly-acclaimed film in 2010 and he does not disappoint in this role and movie either.
Lastly, I am going to talk about Tom Hardy and the star that this guy is. And be prepared to hear a lot about Hardy this summer as he is starring as the villain in the newest installment of the Batman movies. Most people will recognize him from his role in Inception and others that know him well know him for his portrayal of Charles Bronson in Bronson. I really do think he is going to blow up this summer and I think he is going to be one of the biggest stars in the years to come. He is an extremely physical actor and when he is on the screen, he just commands a presence and the people around him. It is hard to not be impressed by him and you cannot help but feel for him in Warrior as you can tell he has gone through so much in his life. The pinnacle scene in this film which takes place in a hotel room with Nolte and Hardy is beyond emotional and the acting is exceptional between both actors. Just keep an eye out for Tom Hardy moving forward, he is one of the better actors out there and is going to be around for a long time. I cannot really say enough about good things about him...
Posted by Drew Brennan at 7:09 PM